Just because it's getting dark earlier, doesn't mean you can quit working when the sun goes down.

So you bring out lights to help you see. Hauling the lights around and setting them up takes time. Extra time you don't have. Wouldn't it be easier if you had a light that one person could set up within seconds and provide enough light that you can see everything and not have to worry about your safety and the safety of everyone on your crew? Let us introduce the All-Terrain Lentry® Lighting System.

Utility companies are quickly learning just how beneficial having a Lentry Lighting System in their toolkit can be. As shown in the pictures below, crews are making quick work of road repairs and trench work with their Lentry Lights, each consisting of a single, extra-tall V-Spec LED light. All photos used with permission. 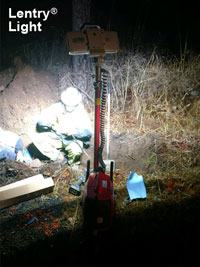 The darkness of the trenches is no match for a Lentry Light.

Kootenai Electric Cooperative in Idaho puts their Lentry Light Tower to the test in different environments and terrains, from neighborhoods to the trenches.

As shown in the picture to the right, legs and poles do not have to be extended in order for the Lentry Light to work (even though we will always suggest the legs are extended at minimum, to help make the system more stable).

Night work often needs to be done in neighborhoods, especially during power failures. Since the light heads on all Lentry Lighting Systems can be aimed exactly where the light is needed, nearby houses will not be disturbed, as see in the picture below where the job site is lit, but the house directly behind the site is still dark. Click pictures to enlarge. Lentry Lights can be aimed precisely where the light is needed, as to not disturb nearby houses.